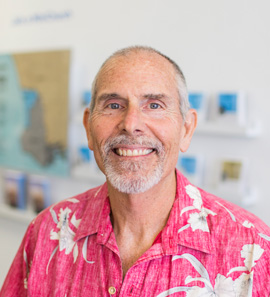 Larry came to know the Lord in 1979 after attending a church service with his wife, Laura, in Alabama. It was a "fire and brimstone" message and he figured he needed "fire insurance." A graduate of the University of Florida, Larry went to work with Chevron right out of college. The company transferred him to Hawaii and eventually to El Segundo. His family became regular attenders soon after their arrival in 1992. He retired from the company a few years ago and has since become a workaholic for the Lord. Beside serving as a District Elder, Larry is a MiniChurch shepherd, part of the Financial Counseling Ministry, serves supporting our Senior Citizens Ministry and helps coordinate the Church's building projects. In his spare time, he is a Youth Baseball Coach and an avid Gators Fan. He and Laura have two sons and five grandchildren. One of his greatest pleasures in life is watching God's handiwork in the beautiful Southern California sunsets with his wife of 40 years.